stonepilewhisper
I have been walking through the woods and over the hills between Seneca and Canandagiua Lakes my whole life. This land has told me a secret and I want to share that secret with responsible people that share my interest in our ancient past. 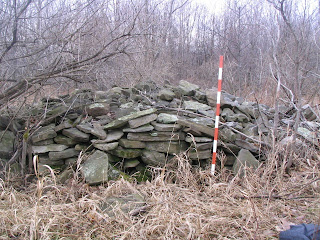 If the stone piles on Hi-Tor and the surrounding hills are of Native American origin one would expect some reports of their existence by the pioneers that first came to this area in the 1780's. With a little research I found just that.

The first account describes a spot in Guyanoga Valley:

On the Ellisworth place was also found a grave of primitive origin, as related by Daniel Lynn to the writer. It was also found under a pine stump. The stump was about a foot and a half in diameter. The burial place was laid up with round burnt sandstone, laid regularly on top of each other in most instances. Human bones, a skull, and one arm bone were found in it, demonstrating that it was a burial place. This was found in 1869. From the full account of it as related, it was evidently a mausoleum of some people long before the Red Men occupied this region.


The second account describes a spot at Indian Pines:

There was an Indian burial ground on the west shore where large quantities of human bones were interred in a mound of conical shape, on the top of which grew an oak tree, eighteen inches in diameter. Many of the skeletons were judged by Dr. William Cornwell and others, to have belonged to very large and stalwart men, some of them nearly seven feet tall. From the shore of the Lake there appeared a drain-like structure about three feet in height and width, running toward the mound. A man could easily enter it but superstitious fears prevented its exploration. It was carefully walled up with flat stones and covered in the same manner. Indian relics abound there plentifully. George Heltibidal, Jr., says that among such articles found there were brass and copper kettles, rifle barrels, fragments of pottery, tomahawks of both iron and stone, stone pipes, and spear and arrowheads. The guns were of large size. He also found grape shot and a six pound cannon ball. Remnants of stone structures existed on the east side of the outlet, which appeared to be furnaces of hard sand-stone three to five feet in diameter, in circular form. Near Campbell’s pottery seven of these were to be seen in one row parallel with the Lake shore.


The report of very large skeletons is interesting. Some have theorized that there was a tribe of unusually large Native people who live in the Northeast. Click on the link to Spanish hill for more information on that topic. I will be writing more on that in a follow up blog.
Posted by stonepilewhisper at 3:11 AM